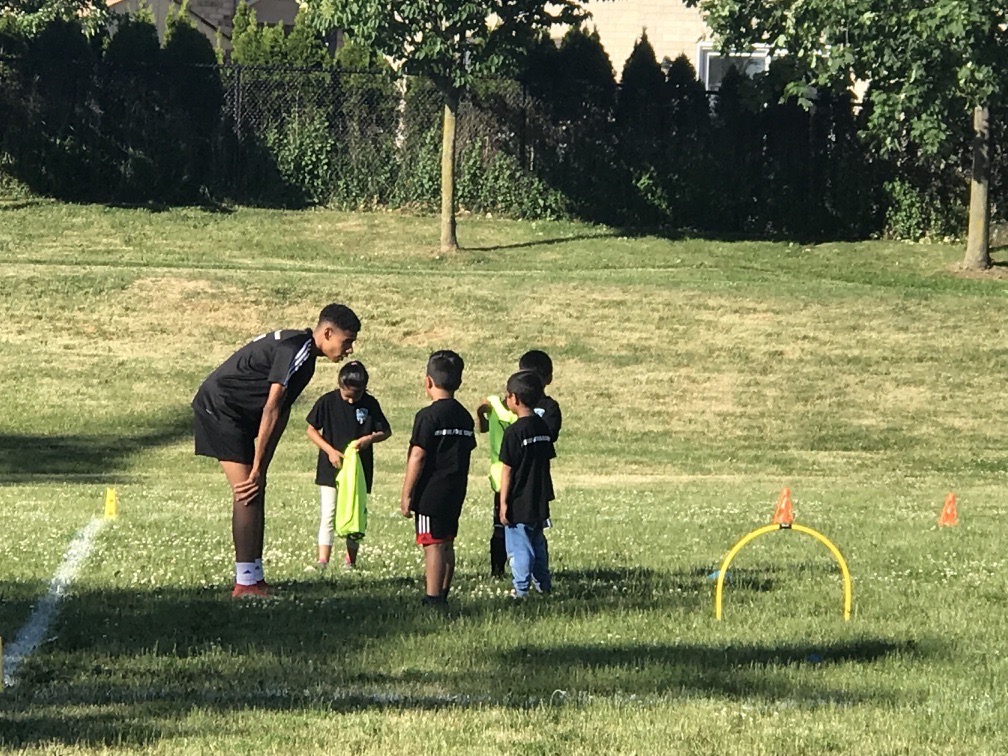 Focus is on “I”ndividual Technical Skills

The U7’s and U8’s focus is still on footwork and developing a comfort level with the ball at their feet. They begin to broaden and they understand that the team is no longer just themselves and their one buddy. It’s expanding to knowing their coach, their team name, and Academy they are associated with. Clearly levels of ability area beginning to be noticeably different among the players. There are early and late developers and the ones that are earlier in their development are showings signs of physical advancement. We don’t forget about the importance of technique at this age.

If we try to teach young players about tactics at this age. This will lead to frustration both for the players and the coach. The focus for U8 players is learning technique, especially dribbling. We Just let them play!!!

Coaching six, seven, and eight-year-olds requires special considerations for their overall readiness. U8 players have not developed enough physically, mentally, psychologically or socially to meet the challenges that older players can. We need to remember that they will be dealing with all different kinds of learning styles and maturities of their players. Some characteristics include:

Focus is on “I”ndividual Technical and Tactical Skills

Skills primarily trained without pressure, then with pressure. We at NFA feels It’s important to establish a good strong solid base. Development of individual skills under the pressure of time, space, and an opponent. There will be a need for demonstration and repetition until skills are mastered.

Dribbling: Encourage player to control the ball; the ball does not control player. Keep ball one step away from the body. Control with instep rather than sole. Take risks! Moves to beat an opponent; Keeping possession – shielding, spin turns; Change of speed and direction.

Receiving: Focus on the ball on the ground, heel down, toe up. The ball does no bounce away. Balls are angled away from the body to prepare for next move. Shoot with laces, instep and with both right and left foot.

Attacking: Encourage players to take others on 1v1.

Defending: Patience when tackling; do not over-commit.

Agility – Focus on with ball control and comfort.

Fitness – Done with a ball.

Keep it simple, kept it fun, keep it moving.

Build on the base that has been established. Continue to challenge the development of individual skills under time, space and an opponent. Begin to increase technical speed.

Dribbling: Encourage to take players on 1v1. Use of feints/moves; Keep possession by shielding and use of spin moves.

Receiving: Emphasize the importance of quality first touch. Focus on taking the ball out of the air and turning with the ball; use of all surfaces.

Shooting: On the run and on a turn; From all angels/crosses and volleys.

Passing: Short, long, bent, crosses, driven, chipped; Train all surfaces and all on the run.

Heading: To goal, to pass to clear

Defending Proper pressure (in front and behind). Use of Channel Players. Need for an immediate chase. Angles of pressure.

Fitness – Done with a ball!!

Agility – Coordination on the ball

Players need to have Discipline Keep it simple, kept it fun, keep it moving.

Encourage: imagination/creativity, increase decision-making and increase demands on the players.

U17’s – U19’s: Focus is on “Development of Positional Play” and functional training.

“The emphasis is a transition into total team play, individual roles within the team, and functional training specific to a player’s position.”

Players must be exposed to a playing and training environment, which extend their mental, physical, tactical and technical capabilities to the limit. They must have a sound understanding of the game’s principles and concepts.

Crossing: (Develop a complete understanding of):

Players should have a complete understanding of the principles of team play.

Fitness – Done with and without a ball

Stretching – Dynamic / Static Stretching (before and after training and matches)

Importance of discipline for warm-up and cool-down

Care and Prevention of Injuries

Importance of rest and recovery

Wishing everyone a great new year from the NFA Fam

Rest in peace Diego Maradona. He was a great inspi

NFA is happy to back on the field.

Wishing everyone a great new year from the NFA Fam

Rest in peace Diego Maradona. He was a great inspi

NFA is happy to back on the field.